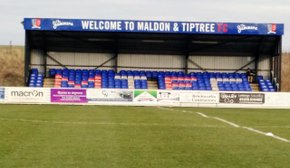 After Tuesday's win over Cheshunt, manager Gary Henty made just a single change to the side, with Jimmy Cook replacing Reece Hewitt. With home side looking to continue their winning home league run, the first half play was a keenly contested affair with the play switching quickly from end to end. The home side threatened early with visiting keeper Lee Butcher managing to grab the ball off the feet of Tarryn Allarakhia in front of goal, before Liam Nash seeing his free kick curl wide of the post.

Tilbury slowly came into the game and had a good 10 minute period. Jack Barham played in Kurt Smith who saw his low effort come off the post and away to safety, before Neil Richmond had a good effort that was deflected wide. A quick Jack Carlile free kick saw the ball through to Lewis Jaggs who saw his first time shot saved by Wilks. Despite a succession of corners for Tilbury, it was the home side who struck. On 27 minutes some good play between Nash and Newson saw the ball played through to Rhys Henry who fired into the corner of the net.

Before the break Joe Nightingill cleared well from a Nash effort. Maldon started the second half well and Tilbury were indebted to keeper Butcher who made a fine save from Allarakhia. The visitors did respond with their own good passing move but the final ball was just too far for Jack Barham, before the home side doubled their lead on 56. This time Henry turned provider with a through ball that put Allarakhia beyond his defender and he took the ball round Butcher before shooting home. The visitors had a half chance to reduce the arrears when Wilks came out of his goal but his misplaced clearance fell to Reece Hewitt who saw his effort go wide.

It was the visitors who were again saw Butcher deny Allarakhia when the forward hit his effort from close range but saw a fantastic save.

The home side continued to press for a third, but Tilbury's defence held out well. On 77 Tilbury were deal a blow when Kurt Smith received his second caution. On 84 Jack Barham saw his effort go just wide. With three minutes to go Maldon made the game safe when Mills payed the ball through to Sam Newson to score. In the final seconds it got worse for Tilbury when Simon Peddie was dismissed, quickly after receiving a yellow card.