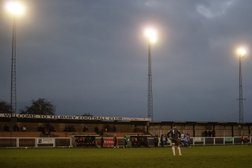 Tilbury and Great Wakering shared the points in a game Tilbury dominated for long periods, but Wakering were indebted to a fantastic strike from Ricky Evans.

In a quiet opening on a bright afternoon, Jack Barham played in Kurt Smith, who saw his low effort well blocked. Tilbury again went close on 37 when Neil Richmond's header was well saved by the excellent Tyler McCarthy and then blocked again in a goalmouth scramble. Before the break Jack Carlile and Kurt Smith went close as Tilbury kept Wakering out,

Tilbury continued to push after the break with Smith again close and defender Simon Peddie denied again by McCarthy. Tilbury's pressure eventually paid off on the hour when Kurt Smith unleashed a volley that was brilliantly saved by McCarthy, but Smith was on hand to fire home at the second attempt. The visitors pulled back 10 minutes later when Ricky Evans from 30 yards, unleashed a belter that flew home, with Lee Butcher unmoved for a fantastic goal. Tilbury continued to attack, but were kept out well by a hard working Great Wakering defence. In the final minute Emiel Aiken hit a low effort just wide, which saw the close to Tilbury's disappointing Christmas/New Year programme.

The result leaves Tilbury still in 10th place. They are back in action on Saturday, when they travel to basement side Wroxham. 3pm kick off.