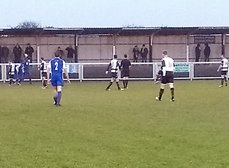 Tilbury made it 4 wins in 5 with an emphatic win over second place Aveley on a wet and chilly afternoon and see's Tilbury go into Christmas in 12th spot.

Manager Marc Harrison made just a single change from there last outing with Oli Spooner returning to the side in place of captain Jack Carlile.

The opening period saw little goalmouth action. Aveley's Firmin Ngandu had a great chance on 19 when he hit over, before George Sykes had a weak effort at David Hughes.

On the half hour Tilbury took hold of the game and were rewarded when a good move saw a couple of one - twos and Lewis Smith laid the ball to Oli Spooner who took a touch and hit home sweetly for a fine team goal. Tilbury went in to the break the stronger side.

Lewis Smith was close on 51 when he hit low past the post. The conditions seem to be worsening, with players finding it hard to control the ball in the wind and rain.

On 65 the visitors well dealt a blow when Daniel Humphreys was adjudged by the referee to use violent conduct and was dismissed. Aveley seem to lose there discipline for a period, with a member of the management team also dismissed. On 74 with Tilbury in control, saw the outstanding Kris Newby hit a free kick from 30 yards that hit the inside of the post and away to safety. A minute later Lewis Smith ran through unchallenged and slotted past Hughes into the net. Tilbury celebrated, but was marred with two people entering the pitch, causing a delay to the restart.

When the game restarted Tilbury controlled the game and finished the game off in the 11th minute of injury time when substitute Harry Norman played the ball back to George Sykes who struck past Hughes for the winner and a well deserved win.

Tilbury moved up 3 places to 12th. The Dockers are back in action on Boxing Day, when they welcome local rivals Romford 3pm kick off.