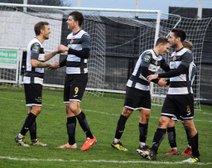 Tilbury Romp Home to Make it 5 Wins in 6

Tilbury's fine recent form saw them make it 5 wins in 6 with a comfortable win over out of form Romford.

Manager Marc Harrison had the luxury of a fully fit squad and went in to the encounter with an unchanged line up.

It was a fast and furious opening, with the visitors having the better chances. In the first 10 minutes Nick Reynolds was denied twice with a header just going wide, before striking a good effort from distance. Roddy Lemba then saw his header go over, before Rhys Madden made a fine save from Reynolds again. Tilbury started to get a foot hold in the game and took the lead just before the half hour when George Sykes found himself on the right, held the ball up for Oli Spooner who raced into the box and slide his effort home. Romford were back on level terms 3 minutes later, when Rhys Madden missed a cross and captain Danny Cossington chested the ball home in to an empty net.

Harry Aldridge made a fine save from Lewis Smith, before the Dockers stuck twice in as many minutes. On 37 a free kick by Kris Newby in his own half, went over the defence and found Lewis Smith in the box who turned and slotted home. From the kick off, the effective George Sykes picked up the ball on the bye line and ran into the box before shooting, Aldridge smothered, before the ball fell back to Sykes who found the net for a fine individual goal. Before the break, Oli Spooner had a great chance when his shot, was well cleared off the line by Cossington.

Romford came out after the break well, but Tilbury retained the lead. Lewis Smith weaved in and out, before seeing his shot saved by Aldridge. Spooner then saw his header go close after a George Sykes cross.

On 57 Romford were awarded a penalty when Toussaint was brought down in the box by keeper Madden, but Rhys Madden redeemed himself, making a save to his left. This seemed to knock the stuffing out of the visitors as Tilbury dominated.

On 59 defender Darren Phillips saw his header cleared off the line, before Mitchell Gilbey was denied three times in as many minutes. On 74 a well worked goal, confirmed the points when Lewis Smith played a good one two with George Sykes before striking home for his second goal and his 6th goal in 6 games and his 14th goal of the season.

Despite the dominance, Tilbury could not find the net again as Romford were indebted to keeper Harry Aldridge, who was called upon to make fine saves.

Late in the game, the unlucky Mitchell Gilbey volleyed just wide from a George Sykes cross.

Tilbury moved up 4 places to 11th and go in good heart to there next fixture on Saturday, when they make the short hop to Brentwood Town. 3.00pm kick off.