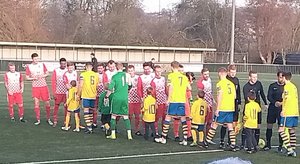 A Game of Two Halves Ends with Defeat

If you were a neutral in the crowd, you would have gone home a happy person as the sides served up a thrilling encounter. The League's leading scorer Lewis Smith scored a hat-trick, but ended up on the losing side.

Tilbury went in to the encounter with an unchanged line up and started strongly and went in front inside 2 minutes. Lewis Smith picked up on a defensive mistake and beat 3 defenders to fire home. On 6 minutes Tilbury again went close as captain Kris Newby saw his free kick saved and Lewis Smith followed up, but was denied by a goal line clearance.
On 16 George Sykes may have scored the goal of the season, when a Mitchell Gilbey corner fell to him and he cheekily back-heeled, that was cleared off the line again.

AFC Sudbury's Ross Crane saw a bullet effort go wide. Within seconds George Sykes was upended in the box, but no penalty was given. Despite Tilbury being in control, Sudbury moved the ball quickly and were rewarded on 22 when a free kick deep in Sudbury's half, found the head of Joe Whight and looped over Rhys Madden.

On 37 the Dockers were again in front, when Lewis Smith ran at the defence, beating 2 defenders slot home. Tilbury continued to cause problems and just before the half time whistle, Lewis Smith charged into the box and this time the referee saw a foul and pointed to the spot. Smith smashed home for his first hat-trick for Tilbury and made it 13 goals in his last 10 matches.
Tilbury would have been happy to go into the break 3-1 up.

The second half was a different affair as AFC Sudbury came out and played some good football. Rhys Madden was called upon early to keep Tilbury in front. On 69 the home side did pull a goal back. A shot from distance was well parried by Madden, but former East Thurrock midfielder Reece Harris was on hand to volley home.

Tilbury were disappointed 5 minutes later when Tilbury were on the attack and a home defender passed back to his keeper, but the referee waved away any protests. Sudbury immediately attacked and Tom Dettmar fired home to level up the game It was all Sudbury and with 9 minutes remaining, they scored the all important goal. A cross from the right found the head of Billy Holland who perfectly glanced his header into the net.

Tilbury pushed hard and with the final effort of the game, saw a Smith corner found the head of Tom Anderson at the back post, but Walker saved well.

The result sees Tilbury drop 2 places to 10th, but are still in the shout for play offs.

Tilbury are back in action next Saturday, when they make entertain Soham Town Rangers, 3.00pm kick off.