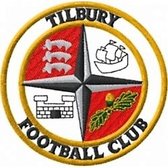 Tilbury and Barking shared a goalless draw on a chilly night at Chadfields, with Tilbury again finishing a game with 10 men. The bright spark was the second successive game with a clean sheet.

Tilbury went into the game with an unchanged line up and it was a fast and furious opening with little goal mouth action.

It took until 31 minutes when Barking's Rashid Kamara broke clear and fired wide after a good period of play. 2 minutes later captain Abs Seymour saw his corner strike the post before Jordan Peart striking at goal as the visitors finished the half well on top.

The second half start was again the visitors dominating as Abdus Salami and Kris Newby both clearing off the line in the space of a minute. Toby Joseph then went close as he hit just over from another corner.
The introduction of George Sykes seem to kick Tilbury into action and a minute after coming on, had 2 corners causing problems for the Barking defence. A Lewis Smith corner found the head of Darren Phillips who headed wide, before a sweet cross field ball from Newby found Smith who went close. On 64 Tilbury should have taken the lead when a Ryan Ramsey corner found the head of Phillips and he somehow saw his free header go over. Despite the dominance, Tilbury were reduced to 10 men on 71 when Kris Newby was dismissed for a late tackle on Seymour.
Despite the man advantage, it was Tilbury who looked more likely to score. Substitute George Sykes saw his effort brilliantly saved by Brown. In the final 5 minutes Abdus Salami saw his header cleared off the line.

Tilbury are back in action on Saturday, when they welcome another local side Canvey Island to Chadfields. 3.00pm kick off.