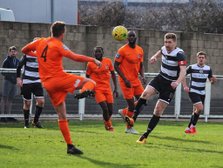 Dockers Lose Out to Late Winner

Promotion chasing Maldon and Tiptree came from behind to sting the Dockers with a late winner.

On a bright and windy afternoon, Tilbury after a 2 week break had an unchanged line up.

Maldon went in front on 8 minutes when Dombaxe crossed for Jack Crawley to hit low in to the net. Just 5 minutes later Dombaxe went close when a 20 yard effort went just over the top. Tilbury then had a good spell with Maldon indebted to keeper Ben McNamara who denied George Sykes twice with excellent point blank saves.

On 15 Dombaxe was again in the action seeing his effort crash off the bar. Tilbury drew level on 33 when Lewis Smith was brought down just inside the box and it was Smith who stepped up to score.

Just before the break a Joe Burgess wind assisted corner almost found the back of the new, but again McNamara had to be at his best.

Tilbury started well after the break and went into the lead, when a poor back pass found George Sykes, who held off a defender, rounded the keeper to fire into the net from a tight angle. Gilbey had a good shot deflected just wide before Sykes was again denied by fine McNamara keeping.

The introduction of sub Dsane swung the game towards the visitors as they created chances.

On 76 it was Dsane who levelled the game, when out of nothing, hit from 25 yards, seeing no movement from either side for a fine individual effort. Despite an effort from Tommy Barton, it was Maldon who continued to throw everything at Tilbury. Liam hope was denied by Rhys Madden. The winner came with just 2 minutes remaining, when a Maldon corner was not cleared and the ball fell to Tobi Coker who latched on to see his shot fly home from 6 yards.

The result sees Tilbury drop a single place to 8th.

Tilbury are back in action next Saturday when they travel to struggling Mildenhall Town. 3.00pm kick off.