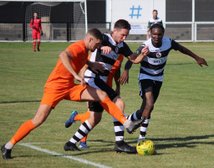 Dockers Pick up First Points of the Season

Tilbury earned there first points of the league season with a single goal victory over Brentwood Town.

On a very hot afternoon, Tilbury saw changes to the line up with Eljay Worrell, Charlie Kendall and Jordan Cox returning to the starting line up.

It was a fast start by both sides. Tilbury went close on 16 when Marlon Agyakwa hit from the edge of the area and saw his shot cannon off the cross bar, before a minute later Ola Ogunwamide seeing his low shot hit the base of the post.

Eljay Worrell saw his volley fly over the top before the break. The early part of the second half was a stop start game. It took a good run by Tommy Barton on 55 to break the deadlock. He went on a run and was brought down just inside the box and the referee pointed to the spot. Jordan Cox made no mistake from the spot. Minutes later Cox saw a volley go over, before Tom Anderson saw a long range effort go just wide for the visitors. On 74 Connor Wheatley had to be at his best when he tipped wide an effort from Jason Williams. Substitute Toby Aromolaran saw a goal line save by Tim Brown. Brentwood were the side finishing strongly as they pushed hard for an equaliser, but were denied by John Easterford and Darren Phillips who held strong.

Tilbury are back in action on Saturday when they take the trip to Witham Town. 3.00pm kick off.