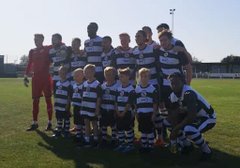 Tilbury Pegged Back by Hullbridge Sports

138 fans were in attendance on Saturday afternoon as Tilbury hosted Hullbridge Sports in their 7th league game of the season, on a lovely late September afternoon.

It took just over 20 minutes for this fixture to see the first goal as Adebola Sotoyinbo calmly sent the keeper the wrong way from the penalty spot, after Matthew Baxter was clumsily taken down in the box by Charlie Kendall.  Oli Spooner tried to spark a quick reaction with an audacious run at Hullbridge’s back four but was soon stopped in his tracks as he lost control of the ball after dribbling past 2 defenders. Tilbury were able to pull one back to make it 1-1 in the 32nd minute as Brian Moses converted an excellent cross from Ryan Boswell. 5 minutes before half time Hullbridge number 10 Adebola Sotoyinbo had to be substituted off for Joe Wright as he sustained a head injury which required urgent attention.4 minutes after half time Tilbury were gifted with the lead as a wayward attempt at goal deflected off Hullbridge centre back George Whitby and ended up in the back of the net to make it 2-1 to the hosts.

Tilbury were able to add another in quick succession as Brian Moses grabbed his second of the afternoon after getting on the end of Sam Carter’s superb corner kick in the 53rd minute. Ola Ogunwamide was introduced in the 66th minute in place of George Sykes for the home side. The contest seemed to be all but over until Tilbury goalkeeper Mitchell Ware didn’t have secure hands from a Darren Phillips nod back, which gave Hullbridge striker Yemi Adelani the opportunity to latch onto it and tap the ball into an empty net. With the score now being 3-2 you could sense that the tide was turning in this match, and that it was going to take a strong last 20 minutes if Tilbury were going to collect all 3 points here.

In the 80th minute Mitchell Ware was again at the centre of the action as he couldn’t keep hold of the ball which came from a set piece and fell into the path of Hullbridge substitute Joe Wright to make 3-3. The home fans couldn’t believe what was being showcased before their eyes as a comfortable lead had just been thrown away. Tensions were flaring within the last couple minutes of the game but Tilbury looked to have found a way through as Ola Ogunwamide skilfully dribbled past 2 midfielders, found himself in a left wing position but his powerful ground ball across the box was just out of the reach of the oncoming Ryan Boswell. The final action of the afternoon, saw an Eljay Worrell free kick, met by Whitby again, but on this occasion, his header crashed off the cross bar, to save his blushes and Ola Ogunwamide followed up and hit over.

Tilbury manager Marc Harrison will be disappointed with how his team lost a 3-1 lead but will now have to focus their next league fixture which is away at Bury Town in a fortnight.