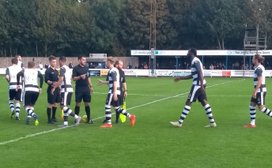 Tilbury saw an upturn in form, with a deserved 2-1 victory at second place side Bury Town in a game they defended well.

Tilbury saw the return of keeper Harry Aldridge to their ranks, following his signing from Romford on Friday and a return to the side of defender Joe Burgess.  The home side started well with a succession of corners, before Tommy Barton  headed wide from an Eljay Worrell free kick.

Tilbury went in front on 18 when Marlon Agyakwa slotted home from a flick on from striker Brian Moses. Bury continued to push hard for an equaliser, until Brian Moses picked up the ball on the halfway line and ran past 3 players, before crossing in to Marlon Agyakwa who crashed home for a well-deserved 2-0 lead.  Just before half time, Bury Town go themselves back in the game, when Ryan Jolland picked up the ball from a break and fired home past Aldridge.

The second half started with Bury Town laying siege on the Tilbury back line in an explosive start to the half. Ollie Hughes saw Aldridge save well, before Chambers-Shaw seeing his effort at goal, blocked on the line by Ryan Boswell's last ditch header.  Tilbury weathered the storm, but had chances of their own. Moses saw his header go just wide, before Spooner playing a good through ball to Moses, but was denied by the excellent Daniel Barden, who saved well at his feet. In the space of 3 minutes, Jake Chambers-Shaw had efforts from outside the area that went very close. The introduction of George Sykes looked to have paid off, as within seconds of coming on, found Barden at his best to deny the shot on goal. On 76 Marlon Agyakwa saw his free kick crash off the upright and away to safety.

In the final 5 minutes, Tilbury's well drilled defence held out, to deny Bury top spot and see Tilbury move up to 9th place in the league.

Tilbury now look forward to cup action, with the first of 3 cup ties, starting this Tuesday away to National League South side Braintree in the Essex Senior Cup.