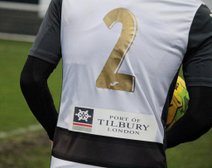 A lackluste Tilbury went down to local rivals Basildon United by a single goal, which saw the visitors play the last 33 minutes with 10 men.

On a cloudy afternoon, the visitors came out strong and had an early chance when Ernest Okah saw his shot inside 2 minutes saved by the feet of Harry Aldridge.

Tilbury were kept to breakaway's as Basildon defence held firm. Just past the 20 minute mark, Danny Norton headed wide, before the same player saw a good save by Aldridge who tipped the effort past the post. On 37 a long Ryan Boswell throw, saw Darren Phillips clear off the line. Okoh broke away on 38 and hit wide before Tommy Barton went close from a David Knight free kick. On 40 the only goal of the game saw the effective Danny Norton play a through ball to Okoh who latched on to hit past the diving Aldridge.

Tilbury looked a little better in the second half, but seemed to run out of ideas how to break down the Basildon defence. Harry Norman rifled over, before Basildon were dealt a blow when former Docker Kris Newby received his 2nd yellow card in the the space of 5 minutes and was dismissed.

The Dockers best effort of the half, fell to captain John Easerford that saw his volley saved by Clarke Bogard.
Tilbury pushed hard against the 10 men who defended well to win there first away game of the season and dent Tlbury's push to the play off's.

The result see's Tilbury drop to 12th in the league.

Tilbury return to action on Tuesday, when they make the trip to Soham Town Rangers in the league.