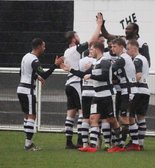 Tilbury made it three successive wins, with an entertaining 5-3 victory over an in-form Canvey Island, with Brian Moses helping himself to a hat-trick and moving up to third place in the goal scoring charts.

Manager Marc Harrison had the luxury of an unchanged line up for the third successive game.

On a pitch that has been under water in recent weeks, started on a soft surface and finished on pitch that got only worse towards the end of the game, due to the rain.

The game started slowly with one chance in the opening quarter with Oli Sooner making his 50th appearance for the club, firing over. On 17 Sam Bantick saw his effort really well saved by Harry Aldridge. On 19, Tilbury took the all important lead, when David Knight found some space in the middle of the pitch, before laying the ball out wide to Ryan Boswell, who sent in his cross, only to be met by Brian Moses who hit towards goal, but keeper Lamar Johnson got his hand to the ball, but was unable to stop the ball crossing the line. Canvey earned a well deserved equaliser on 27 when Tobi Joseph broke down the left, fired towards goal, but Jason Hallett helped the ball home. On 36 Ola Ogunamide went on a run, but was denied by a fine Johnson save. On 40, the goal of the game fell to Ogunwamide who collected the ball on halfway and ran towards goal. He controlled the ball in to the box, before shooting at goal to find the bottom corner of the net.

The game really livened up after the break, with Tilbury increasing the lead on 47 when Brian Moses kept the ball close to him, before turning and firing home. This did not deter the visitors as they pulled a goal back 3 minutes later, when Hallett played a through ball down the left for Bantick, who crossed and found Kane Gilbert who slotted home.

Before you could settle, Tilbury made it 4-2 just 2 minutes later, when Boswell was again the provider, finding Moses who turned and hit home to earn a hat-trick, the first by a Tilbury player to score 3 on Boxing Day. With the rain coming down, it continued raining goals. On 55 Adam Topley played a ball through to David Knight who got to the ball and slotted past the on-rushing Johnson and the ball rolled over the line. Ogunwamide had a great chance on 63 to increase the led, but after cutting inside on his right, he hit wide of an empty goal. Despite being 5-2 Canvey did not give up and attacked at every moment. On 73 Albert Levett, found Hallett on the edge of the box, who found Sam Bantick who shot home. On 84 hat-trick hero Brian Moses, saw his shot saved well by Johnso, before being provider a minute later, when he found Ogunwamide, but his shot, went a whisker wide.Late in the game Canvey did all the pushing, but could not break down a strong Tilbury defence.

Tilbury move up one spot to 9th, just a few points outside the play off places and are back in action on Saturday when they make the short trip to Brentwood Town.

Subs Not Used: Burgess and Mallett