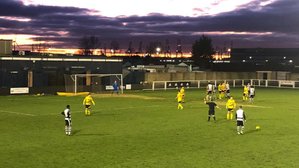 Tilbury Pegged Back by Witham Town

Goals either side of half time, saw Tilbury and Witham share the points in a game Witham defended for long periods, but did well to keep out Tilbury's fire power.

Manager Marc Harrison again went in to the fixture with an an unchanged line up.

The game started with some robust challenges, but took until 13 minutes for the first effort. Ola Ogunwamide saw his shot deflected wide. The resulting corner from David Knight found the head of John Easterford, who saw his effort go wide. Despite Tilbury's early dominance, it was Witham who took the lead when a corner from the left found the free head of Declan Nche to score.

Tilbury came out after the break all guns blazing and equalised on 48. David Knight got himself into the box and played the ball square to Eljay Worrell to rifle home for his first of the season.

Chances were limited as Witham got players behind the ball, stopping Tilbury attack. On 57 a long 50 yard free kick from David Knight had to be tipped over the bar by former Docker Rhys Madden and the left footed corner from Worrell, almost went straight in.

Late in the game Bran Moses went close with a header, but it was Witham who finished the stronger.

Despite the draw, Tilbury did move up one spot to 8th, with games in hand. The Dockers are in action on Tuesday night when Heybridge Swifts visit Chadfields.