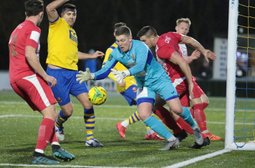 Tilbury Slip in to Play Off Places

Tilbury moved in to the play off places with a deserved 2-0 victory over AFC Sudbury and achieving there first ever win over them in 21 attempts.

Manager Marc Harrison went in to the fixture with an unchanged side, knowing they could finish the afternoon in the top 5.
The home side started quickly with the dangerous Harris seeing his cross flash across the Tilbury box in the first minute. On 2 Tilbury should have taken the lead when Ola Ogunwamide found space in the home penalty area and somehow curled his shot wide of the post. Another cross from Harris saw Sean Marks shoot over. On 15 Ogunwamide again caused problems when Paul Walker in the home goal came to the rescue. Tilbury did go in front on 19 when a move down the left found David Knight who turned the defender twice before crossing and Ogunwamide got enough of his foot, to see the ball fly home.

On 22 Tilbury again went close when Ryan Boswell sent a ball through to David Knight who struck the post and Ogunwamide followed up, but some how hit wide with the goal gaping to spurn a golden opportunity. Ben Hunter then shot wide of the post as the home side never gave up. Just before the break, Lewis O’Malley shot over the crossbar for the home side before Ogunwamide turned and shot in the area only for Paul Walker to pull off another superb save. The rebound by Knight went wide. Tilbury were disappointed to only go in 1 up, when it could have been more.

Tilbury started the second half well with David Knight denied by the excellent Paul Walker, who tipped his shot wide. Reece Harris sent his free-kick from just outside the penalty area over the bar. The home side were pushing hard and on 2 occasions, Harry Aldridge had to be at his best to deny any equaliser. On 63 Lewis O’Malley headed a corner straight against the post and Aldridge then saved the rebound. 6 minutes later Tilbury had another golden chance when Knight played the ball through to Marlon Agyakwa who shot wide, with the goal open. A minute later Worrell sent his corner in and Ryan Mallett screwed his shot just wide of the post.

On 72 Tilbury who were still pushing for another goal saw Knight again in the thick of the action when he slipped the ball through to the feet of Brian Moses who hit over. On 75 it was Sudbury's turn to go close when Sean Marks was denied by Aldridge. It was end to end with more opportunities for both sides. With the 90 minutes up, the referee indicated 7 minutes of additional time, which left Tilbury nervous, but this was dispelled 5 minutes in, an error in Tilbury's half, saw striker Brian Moses collect the ball and run all the way in to the Sudbury penalty area, only to see Walker make a fine low save, but the ball fell to David Knight to slot in to an empty net to seal the victory.

Tilbury move up to 5th in the league. The Dockers return to action on Wednesday evening when they take the short trip to the Brentwood Centre to play Romford.

Subs Not Used: Topley and Purdy