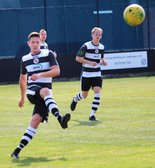 Dockers Up to Second

Tilbury came from behind to beat local rivals Basildon United, to move up to 2nd in the league.

It was an early kick off and Tilbury were the side slow to start. Tilbury saw the return of defender Joe Turpin in the centre of defence. It was Basildon who took the game to the Dockers, but it was Tilbury who had the first chance of the morning, when Ola Ogunwamide saw his shot deflected wide. Basildon's first chance came on 7 minutes, which resulted in a goal. Campbell beat Charlie Yexley and exchanged passes, before calmly slotting into the bottom corner of the net.

The Dockers responded with Sam Keefe poking wide of the target. Tilbury were offered a way back into the contest when Basildon captain Ben O’Brien was deemed to have handled a cross just inside the box, but Lewis Smith saw his spot kick saved by George Marsh. On 15 Conor Tyrell then forced Tilbury goalkeeper Joe Osaghae into a fine diving save from long range, while O’Brien nodded a cross narrowly wide. Osaghae was again called into action by Reece Price-Placid, who cut inside before striking goal wards, but was saved again. On 32 Tilbury drew level. Lee Burns burst forward from the back, the ball fell back to Tommy Barton to unleash a thunderbolt that flew into the top corner of the net. The game was turned on its head, 3 minutes later when Brian Moses picked up the ball, just inside the Basildon half and used his strength to hold off Pibworth and run through to score through the legs of Marsh, for a fine individual goal.

Basildon continued to attack well and could have levelled on the break when the dangerous Campbell found himself one-on-one with Osaghae, but it was the Tilbury keeper who denied with his legs.

The first action of the second half saw Moses unmarked in the penalty area after a cross from Agyakwa, but Marsh saved. On 61 Ogunwamide went on a run, but the winger lost his footing at the crucial moment. On 66 Ben O'Brien saw Osaghae make a fine finger tip save. Minutes later, Joe Turpin up from the back saw his volley brilliantly save by Marsh, as it looked a certain goal.

With 8 minutes remaining, Tilbury confirmed the points when Tommy Barton got his second goal, after a Lee Burns free-kick that was headed in to an empty net. On 85 things got worse for Basildon as substitute Staunton saw red for a over-the-ball challenge. The final action of the game saw Moses hit an effort wide.

The result sees Tilbury move up to 2nd spot. The Dockers are back in action on Wednesday night when they make the short trip to play Romford at Aveley FC.

Subs Not Used: Burgess and Easterford