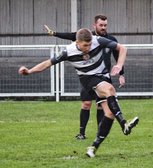 Tilbury Lose out to Champions Elect

League leaders Maldon and Tiptree came from behind to increase there lead at the top.

Tilbury boss gave a first start to Lewis Smith in five months, with John Easterford and Ola Ogunwamide returning to the side, trying to be there first side to do the double over the Jammers.

Tilbury made the best possible start after just 2 minutes, when a left wing cross by Ola Ogunwamide, found the head of striker Brian Moses, who nodded past Ben McNamara.

On 5 minutes Tilbury could have taken control of the game, when a long ball from Moses, found Ogunwamide, who saw his effort well blocked by McNamara, to prevent the wingers effort from finding the net.
The visitors weathered the early storm, and started to put pressure on the home defence. Both Cass and Hughes, both failed to put away difficult chances. On 13 minutes they did equalise when Conor Hubble's flighted corner, flicked off his head by Martyn Stokes at the near post to hit the net at the far post. Ryan Charles was then just denied a goal when his lobbed effort beat home keeper Joe Osaghae, but a home defender was on hand to head the ball out from the goal line before Tilbury's Ogunwamide fired in a good 25 metre shot that McNamara just put round his post. The visitors finished the half well.

The Dockers Ogunwamide was given an early second half scoring chance when he was given a clear run on goal, but again McNamara came to the rescue. On 59 Maldon took the lead when when Hughes played Cass in, who sharply struck home, for a fine goal. Another good save by Osaghae, as the keeper made himself large to stop the shot. The visitors Hubble was causing problems for the home defence with his accurate corner kicks that were landing in the goalmouth with one from either wing just being cleared away before a short corner routine gave Al-Amin Kazeem the chance to get a good cross in that Cass, although making contact, but could not force over the goal line.

With the 90 minutes up, the referee indicated there was still 10 minutes injury time and during this period, Tilbury threw everything at Maldon, who defended stoutly to hold on to the all important win.

The result sees Tilbury sit in 5th spot. The Dockers are back in action on Saturday, when they make the short trip to play Basildon United at Aveley FC.

Subs Not Used: Agyakwa and Bennett