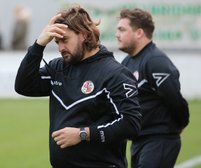 A below Tilbury performance, saw the Dockers lose there first league game in 13 to a resurgent Brentwood Town side at Parkside, the home of Aveley.

Brentwood started well on a blustery evening and took the lead on 14 when they broke down the right, before crossing for Marcus Milner who shot home. It took Tilbury just 2 minutes to make it level when Ola Ogunwamide went on a mazy run, before hitting past Tim Brown. On 26 Tilbury were indebted to on loan keeper Joe Osaghae when he denied a good attack, with a fine save, denying a certain goal. Just before the break Andy Freeman saw a sharp effort well turned away by Osaghae, before the home side lost the services of Ocran, after picking up an arm injury, that delayed the first half.

The home side started the second half, the same way they finished the first, with a good cross on the right, substitute Marcus Elliott swung home for the lead. Within seconds Elliott had a great chance to increase the lead when he saw his header go wide.

On 67 with the game being taken to the Dockers, Osaghae was again at the rescue when he smothered a Elliott effort, before the follow up struck the post. On 70 Brentwood were awarded a free kick on the edge of the area and former Docker Adam Topley smashed his free kick home. Brentwood confirmed the points 5 minutes later when Andy Freeman latched on, from the edge of the area and hit past Osaghae. At 4-1 Tilbury looked down and out. With 7 minutes to go, Tilbury gave themselves a lifeline when a David Knight free kick, was met by substitute Sam Keefe to score on his debut. Tilbury pushed hard and in the final minute Oli Spooner brought the ball down and played in David Knight, who volleyed home for his 19th of the season.

The final action of the game saw a Tilbury corner that had every player in the penalty box and with the ball bouncing about, the referee blew his whistle.

The Dockers are in action on Saturday, when they travel to Histon 3.00pm.