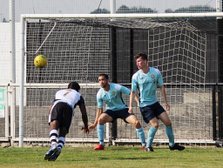 Tilbury achieved their first win of the season to progress in the FA Cup over an in form Stanway Rovers.

Manager Marc Harrison made 3 changes to his line up with Darren Phillips, Joe Burgess and Toby Aromolaran returning to the side. Under 18 midfielder Lewis Brougham was also included for the first time.
Tilbury flew out of the blocks, with Tommy Barton inside the first minute seeing his back post header well saved. Just 2 minutes later Marlon Agyakwa hit from distance and again 16 year old keeper Luke Skinner saved well.

Tilbury were dominating with some good moves. On 22 George Sykes went down in the box, but no penalty was awarded.
Tilbury went in front on 32 when a long ball found George Sykes, keeper Skinner came out of his box and Sykes was able to cross and land the ball on the head of Ola Ogunwamide who made no mistake with his head.

The visitors looked stronger after the break and drew level on 53 when an in-swinging free kick was not cleared and Tom Holdstock tapped home into an empty net.

On the hour Tilbury went close when a Joe Burgess free kick was headed towards goal by Tommy Barton, but the ball was cleared off the line and away to safety. The next attack saw Tilbury go back in front. Marlon Agyakwa went on a run before finding George Sykes who hit home. Stanway went straight on the attack and had a good chance from a breakaway. On 68 Tilbury confirmed progression when a quick corner from Agyakwa found Ogunwamide who fired home.
In the final minute Joe Maybanks went close for the Thurlow Nunn side, but it was Tilbury who progressed to the 1st qualifying round.

Tilbury are quickly back in action on Monday afternoon, when local rivals Brentwood Town visit Chadfields. 3.00pm kick off.