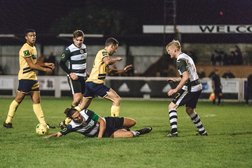 Tilbury returned to winning ways in the Velocity Cup with a comfortable win over a youthful Witham Town side, giving the Dockers a chance of qualifying.

Marc Harrison made a number of changes to his side, which saw another clean sheet.

Tilbury took the lead on 6 minutes when Brian Moses headed down to striker David Knight who fired superbly into the roof of the net.
The Dockers were attacking in there droves and on 17 Knight saw another good effort saved, before the follow up striking the bar. On 27 Knight was again denied by Ben Porter in the Witham goal. Witham did have a good period seeing Palmer hitting over before Byrne-Hewitt having his effort saved by debutant Christian North.

On 36 Tilbury had a chance to increase the lead, when Ola Ogunwamide was brought down in the box. Ogunwamide took the kick, but slipped as he hit it and the ball rolled to Porter for an easy save.
Tilbury did increase the lead before the break when David Knight's corner found the head of Brian Moses who directed the ball home.
Tilbury looked strong after the break. Worrell's free kick  went just over, before Ogunwamide ran through and was again brought down in the box giving the referee no option to point to the spot. This time David Knight took the duties and scored. Just passed the hour Ryan Boswell and Brian Moses had good opportunities, before the dangerous Ogunwamide scored a well deserved goal after Moses flicked the ball on to find the net.

The evening got worse for the visitors, when Pat Ahern was dismissed on 86 for a foul on Ogunwamide, earning a second yellow card. The final effort of the evening fell to Worrell, who's free kick was tipped over.

Tilbury return to action on Saturday, when Coggeshall Town are the hosts.