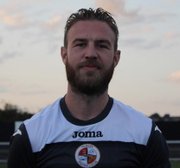 Tilbury saw off local rivals Basildon United to top Group 9 of the Velocity Trophy and stretch the winning run to four.
Manager Marc Harrison made changes from Saturday's win. The Dockers dominated the first half for long periods and saw Charlie Kendall after just 5 minutes see his shot saved by former Docker Clarke Bogard. Tilbury broke the deadlock on 15 when Ola Ogunwamide cut inside and curled his shot home into the bottom corner of the net. With Tilbury dominating, it took just 3 minutes to increase the lead when Marlon Agyakwa got down the right and crossed for George Sykes who hit home.

The game became a stop start affair with numerous fouls. Basildon's best chance of the half fell on 43 when Tilbury had to twice clear the ball off the line.

The second half was was a more level affair with defenders John Easterford and Darren Phillip putting there bodies on the line to deny both Tom Anderson and Adam Vyse. Tilbury also saw Tommy Barton and Brian Moses go close, both picking up on mistakes in the home defence.
The introduction of both Toby Aromolaran and Jordan Cox brought rewards, as the two players linked up well in the final 3 minutes, as Cox played the ball through to Aromolaran who slotted home past Bogard.

The result sees Tilbury move on to FA Cup action at Biggeswade on Saturday in good heart.