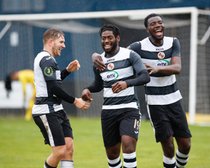 Tilbury Smash Through the Trophy

A strong second half performance saw Tilbury blow away South Central side Waltham Abbey to make progress in the FA Trophy.
On a wet afternoon, Tilbury saw a debut for Kevin Songolo and a second half appearance for Calvin Ekpiteta. It was the Dockers who flew out the blocks and took the lead inside the first minute. Ola Ogunwamide picked up the ball on the half way line and broke through, out pacing the defence, before unselfishly playing the ball to the on-rushing Brian Moses to score in to an empty net.
Abbey's Aron Gordon was through in the 7th minute, but a good last ditch tackle by Songolo denied a goal. Oginwamide was causing problems for the men in green and was denied 2 minutes later. Tilbury continued to push hard, which saw Oli Spooner hit a long range effort over.
Charlie Edwards then saw his effort go over the top as the visitors grew into the game. On 27 they were rewarded when a ball from the right was not cleared and the effective Leonne McKenzie crashed home. With Abbey finishing the half well, they will be disappointed, as right on half time, Ryan Boswell played a delicate ball in to Oli Spooner who composed himself to score in the bottom corner.
The second half started in the same as the first, with a goal just 2 minutes in. Billy Holland found the net to bring the game level.
Both sides were in the game and it felt the next goal would win the tie. It was Tilbury who got the goal. On 68 Tommy Barton flicked the ball into Brian Moses who turned well in the box and fired home. Seconds later Moses was close to getting his hat-trick when his effort was well saved by Crowley. Tilbury were now having a good spell in the game and on 78 a chip by Oli Spooner found Darren Phillips just  outside the box, who smashed his effort into the net for his first goal for the club. A further 2 minutes later Spooner was then played in by Brian Moses, who held the ball up and Spooner rifled home to make it 5-2. In the final minute substitute Calvin Ekpiteta slotted home for a debut goal, following a good build up.

After the game a delighted Assistant Manager Liam Wallace commented "Our last three performances have been good but we have been falling short with the small margins in front of goal, but today we was fantastic and I am proud of them all. I am also delighted for everyone involved with the club that work extremely hard behind-the-scenes"

Tilbury have a break of 10 days, before action resumes away to Hullbridge Sports on 22nd October in the Velocity Trophy. The Dockers will be looking closely at the draw for the 1st Qualifying round which will take place on Monday afternoon.