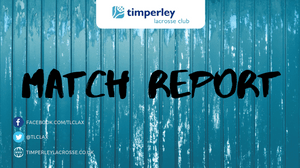 A Winning start to the season

Going into the first game of the season is always a big mental challenge. No matter how much you prepare and train you cannot simulate the pressure of the real thing. When you've work hard all pre-season, mentally and physically prepared, all you can hope for is a good warm up and a good start. Timperley suffered from quite a turbulent pre-game! With goalkeeper Gregor Allan taking a bad impact to his thumb leaving it fractured and sidelining him only 10 minutes before face-off, it wasn't the start that the team was hoping for.

By the time the whistle blew to start the game, Tim Blower had just finished clipping his helmet.

Despite a tough pre-game, the relatively young Timperley team showed tremendous maturity and class in the opening minutes. Controlling possession and exercising patience. Well worked team goals from Ed Loveland, TJ Burgess and Michael Armstrong gave Timperley a positive start. Tim Blower showed his class with a very strong 1st quarter performance despite not being warmed up. Norbury managed to find the goal twice leaving the score at 3-2 going in at the quarter.

At the start of the second quarter the heat was setting in, but an athletic Timperley team started to turn the screw on Norbury. More lengthy spells of possession and intelligent team play lead to 7 goals from the Blues. Norbury also pushed on scoring 3 more taking the halftime score to 10-5 to Timperley.

Timperley had their tails up and showed their dominance in the 3rd quarter where they scored a further 7 goals, conceding only 3 leaving the result in little doubt when the whistle blew for quarter time with a score of 17 - 8

With the job done and the heat taking its toll in the final quarter, all that was needed from Timperley was a controlled finish. They held the ball for long possessions, worked hard off ball and took the high percentage chances when they came. Ed Loveland, Will Greaves and Sam Hurst all added to the scoring taking Timperley to a total of 20 goals. Norbury fought hard to the finish adding a couple more goals of their own.

In summary Timperleys performance was mature and impressive. Special mention to some of the younger team members that really stepped up in an important game; Will Greaves, Harry Alti and Luke Frahill-Jones all impressed.

The stand out performance of the game was TJ Burgess who's intelligence, off ball movement and sharp shooting lead to him scoring an impressive 7 goals and earning him the accolade of Man of the Match.