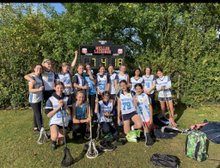 U15 Girls First Game of the Season - WIN vs Mellor

Timperley Girls U15 win in style at Mellor

Hi all,
A fantastic start to the season!
Masive thanks to Robin for coaching the team. His report is below:

A great morning spent in the sunshine away at Mellor with a very strong group. Thanks for the great support on the sideline, especially loud from the girls. Fantastic team spirit and support for each other.

Timperley led from the first draw and looked comfortable throughout.

As a 16 player team we were able to maintain intensity both with and without the ball.

Our fast breaks were decisive and Mellor found them almost impossible to stop. So effective we asked the team not to do them in the final quarter. The game was won and we had the luxury of using the time to work on our on slow breaks and maintaining possession.

Out of possession the tactic of dropping deep early improved throughout the game until Mellor couldn't get out of their own half. Attack and midi lines were excellent at this showing great lacrosse intelligence. This defensive tactic will be extremely useful option when we play more technical opposition teams.

Stopping their fast breaks enabled us to protect our goalie with organised defence and our double team limited Mellor to very few shots. Katie was as brave as ever in goal and launched our own fast breaks with accurate passing.

Working together, all over the pitch the girls won 18-7 against a physically more mature team and this is an excellent way to start a season.

Looking ahead though we discovered some key areas that we need to work on as individuals and as a team.

In the final quarter, when the girls were only allowed to shoot after 20 passes, we found it really difficult to maintain possession.

This was the main post-game observation from Chris our referee, who is also the U 18's coach at Timperley.
The standard has been set very high at Timperley and this controlled possession style of lacrosse is what we must develop to get to the next level.

Apologies for not keeping track of goals and assists but I feel that if I did that I should also count the ground-balls won, defensive turnovers, shot stopped and successful draws. These are the moments that lead to attempts on goal and the whole team should take huge pride in the final score. But make no mistake, our attackers were ruthless today!!

Well done and see you all Wednesday.

1st game if the season.
Meet at Mellor - 9.15am.
Game will be on grass.
NB: it’s the Manchester Marathon that day, so M56 will be the best route.

Unfortunately I can’t make this game, but Robin and Sarah will be taking care of the team, so you will be in good hands.
Good luck!

See below re directions and parking from Mellor:

It’s best if parents park at the opposite end of the sports field by the school. That’s the end we play at too. Knowle Road SK6 5PL.