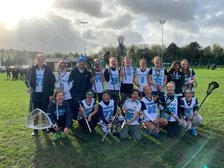 We knew that this game would be a test, and we have been saying at training that it would take hard work to beat them.

But we beat them!
We worked hard and we beat them!...
I have to keep saying it, because I still can't quite believe it! I am super proud of this TEAM!

Norbury were physical, direct and strong. We began the game and went 4-1 down. It was looking like it was going to be a tough day. And tough it was. But Timperley kept their heads up, contended and fought back.

With a large squad, Timperley worked the midfield and attack lines on a rotational basis. The girls made this work really well, with those on the sidelines fully supporting their team-mates who had taken the field.

We finished the half 6-5 down, but the latter stages of the second quarter had been dominated by Timperley team play. Despite being behind, the mood at the break was inspiring.

The pressure from Norbury was relentless, but the Timperley girls matched them with determination and persistence. What we lacked in physical size, we more than made up for in support for each other, really getting under the skin of the Norbury players with our targeted
defence all over the field.

There were some ‘beautiful lacrosse’ moments in the game where we moved the ball so efficiently and effectively, but the story of this game for me was grit, determination, and teamwork.

Aside from that mention (because Katie was awesome in goal today), I am not going to go through the squad, listing everything. I have so many positives that I could list for each and every Timperley player today – every single one of you contributed. There were no passengers.

The overwhelming positive was how the girls played as a team. Just take a look at the scorers table – goals from many players! Timperley are a team threat and when you have great players all over the field, it’s very difficult for other teams to know how to defend.

Timperley U15 girls – you outdid yourselves!
Know that the parents, coaches and club are very proud of what you have achieved today!
I keep saying it, but that’s because it’s a fact – you are a great group of girls and a great team – there is so much more to come.

Well done, bask in your glory, enjoy the win!
See you Wednesday at training! ?

Hi all,
Thanks for setting your availability. We have a great squad.
The match will be on the grass pitch.
Start time is 9.40am. Meet at 9am.