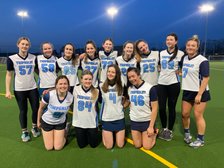 This was the last league game of the season with Timperley needing to win to secure a 100% winning record and win the league title, and the girls did so emphatically with a 25-1 victory over Heaton Mersey.

There isn't much to say about the game itself except that Timperley started a little poorly by their standards, being keen to make a fast start, but this just resulted in a lot of wasted possession. They led 6-0 after the first quarter and played their best lacrosse in the 2nd when they settled into a much better passing rhythm and reached half time with a 15-0 lead. You had to feel for Eliza in goal, who didn't touch the ball once in the 2nd quarter - she deserves a big thank you for cheerfully supporting the team through this game, and pulling off some good saves and executing some excellent clears when she was called upon.

The second half of the game was a bit more experimental with lots of players playing out of position etc, but the girls seemed to enjoy it. Heaton Mersey scored in the 3rd quarter albeit through an own goal with Timperley only scoring four times. The final quarter was 6-0 to Timperley.

Well done to all of the girls for a good game, and moreover for an excellent league performance all season to become 2021/22 league champions! :-)