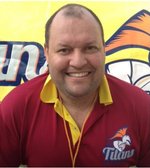 Calven “The Beige Assassin” Bland has been playing rugby since he was 5yrs old back in NZ and still manages the odd game with the WanderersRFC Veterans side.

That currently amounts to 39yrs running around the paddock with the egg shaped ball, all that time in the forward pack and always in the front row.

A loosehead Prop by training but a very capable head when it comes to coaching and organizing things around the rugby field.

Coach Beige understands teamwork and how rugby as a sport not only allows your child to flourish as a player but also gives them valuable lessons in life in terms of friendships, drive, determination, fairness, integrity and fun. This has been developed in NZ through junior rugby, school rugby, Army Rugby, University Rugby and Senior Mens Rugby and more recently since 2005 in Singapore with the WanderersRFC as a player and a coach

His most recent success was in 2013 coaching two WanderersRFC Conference Grade Teams and taking one of them to win the Grand Final that year.

Calven currently has his IRB Coaching Level 2 (Theory) and full IRB Level 1 Coaching Certificate along with the IRB Rugby Ready qualification. This coupled with coaching at the WanderersRFC t you can be assured despite his 44yrs of age his coaching techniques and skills are relevant to the Game being played today.

When Calven is not running TitansRFC he is active on the Singapore Rugby Union Management Committee and as a Board Member of Rugby Singapore Pte Ltd a Rugby Events company (World Rugby International 7's Series, Super Rugby Singapore, World Club 10's)