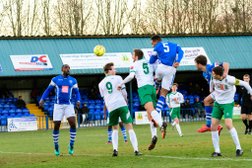 Four assists for Wheeler, a brace for Elder

The home side opened their account in the 13th minute when Wheeler sent over a cross from the left that was converted past goalkeeper Dan Lincoln by centre forward Nathan Elder. The tally was doubled in the 33rd minute with some trickery from Wheeler whose pass put Alex Akrofi in on goal and the striker made no mistake from close in.

On 39 minutes that man Wheeler delivered a cross that saw central defender Mitchell Nelson up from the back make it 3-0 to the home side.

Bognor had just two chances to show for their first half efforts, a long range attempt from Ollie Pearce that went just wide, and a James Wild shot from a corner straight at Angels 'keeper Anthony di Bernardo.

The away side improved in the second half and had more possession but were not really a match for the uncompromising Tonbridge defence. They had a glimmer of hope when a brilliant volley from James Fraser reduced the arrears on 70 minutes.

It was game over however on 80 minutes when Wheeler once again delivered the perfect cross for Elder to head home for his brace.