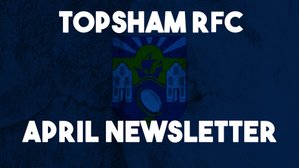 Rugby is well and truly back and this month (more specifically the last two weeks since our last newsletter) ...

BACK IN THE BLUE
Rugby is well and truly back and this month (more specifically the last two weeks since our last newsletter) the club saw its members donning the famous Topsham blue again in games. The busiest of the sections has been the Walking Rugby team. They enjoyed a great run out (or perhaps walkout is more suitable) at a 'Walking Rugby Festival' hosted by Exeter Saracens, an event that saw them take on a number of local Devon clubs. The event was a wonderful exhibition of the ever-growing presence of the sport in the South West. One of the teams in attendance was Ivybridge RFC, where just a week earlier many of the Fossils were down offering their experience and expertise to help grow the game within a new club. Fantastic work all around.
The Colts were the first side to take to our hallowed turf this year as they hosted local rivals Withycombe. The game was originally supposed to be forty-five minutes in length with three-quarters of fifteen, however, due to the eagerness of both sides and the crowd, they played for an extra fifteen. After a tight opening, our Colts eventually proved too strong for Withycombe and they ran out deserved winners in a fixture that finished 33-12. Hoping to keep their momentum going the Colts will be in action in a range of fixtures throughout May. Their next game is away at Sidmouth on the 1st of May.

TRFC KEEPS THE BBQ FIRES BURNING
With the government relaxing their rules in recent weeks we have been able to reopen the club to both members and the wider community; beyond just rugby. We hosted our 'Big Blue BBQ' event on the 17th April and then followed things up with another BBQ the week after, both of which proved massive hits. We saw plenty of old faces enjoying a pint in the sun but we were also massively buoyed by the number of people we saw popping in who had never been to the club before. Eagle-eyed attendees among you may also have noticed Exeter Chiefs' stars Facundo Cordero and Don Armand in attendance. Judging by when they turned up they must have rushed straight down for a burger after they were both involved in the Chiefs' dismantling of Wasps at Sandy Park earlier that afternoon. In terms of remaining BBQ events and their dates see below:

SAT 8TH MAY
SAT 22ND MAY
SAT 29TH MAY
We will also be running our car boot sale on Monday 3rd May.
As always we'd like to thank our many volunteers and sponsors who help run all these fantastic events, without your support it wouldn't be possible.

On the 16th April Topsham Ladies will host one of the nationally renowned 'Allianz Inner Warrior Camps'. The sessions are designed to help grow women's rugby and offer a fun and informative way for new players to get involved. The camps have been promoted by legends of the game like Katy Daley-McLean and will be mentioned on a variety of local media platforms in the lead up to the event. The Ladies have had a brilliant return to training in terms of numbers with plenty of new faces both to the club and the sport itself. With other local teams starting their own sections, having an event of this kind only strengthens the position of TRFC as a great place to play women's rugby even despite competition from elsewhere. Having spoken to some of the team, there is a great buzz about having the event on home soil.
For more details on the event press here.