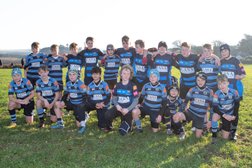 Sunday we had a fantastic morning of rugby as we welcomed Honiton and Minchinhampton to Topsham, First up we played Honiton which turned out to be the best game of rugby you have played this season.
Communication was fabulous, the forwards attacked in controlled numbers , and backs using planned attacks instead of reacting to what was on offer, In short it was joined up rugby using much of the training we have focused on for much of the season, our defence was top draw we held our line and took down what came to us instead of chasing tackles and the result was a total demolition of Honiton 45 - 0
The first time we have ever beaten them to zero, it was an awesome performance , I think that's the best place to leave this match report as for the next game Topsham simple did not turn up , you shot your bolt at Honiton , all the effort to right the wrong of the earlier meeting this year left you totally spent and a very poor performance against mitch was to follow, fitness also played a big part in our game falling apart .
For the Honiton 10/10
Great effort all round .
As for the second game - you need much work on your fitness ,
Share via
FacebookTwitter
https://www.pitchero.com/clubs
Recent news