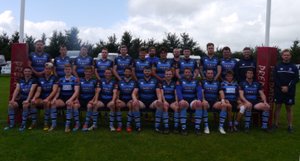 A great start leads to a bitter end.

The 1st XV entertained New Cross at home on saturday and were stunned by the drastic change in the flow of the game.

Within the three minutes of kick off our esteemed captain Jack Knowles crossed for a try which he duly converted. Five minutes later Tops were awarded a penalty infront of the posts which Knowles duly coaxed over the posts. New Cross fought back turning over the ball off the restart and attacking aggressively forced a penalty in Topshams half taking the kick for posts new cross reduced Top's lead by 3. After the next restart hooker Sam Bray was sent to the sin bin for a spear tackle. Not wanting to let a man in the get in the way of a good game Tops responded with Adam Buckley racing down the wing and crossing for an unconverted try. Graham Searle followed suit with a kick and chase, this try also went unconverted. Topsham lead 20 - 3 with only 24 minutes gone. With our man out of the sin bin things were looking good for the boys in blue. With 15 minutes left of the half what team could come back from that kind of start. Well New Cross did scoring four tries two of them converted.

After the break Tops regained composure working from a solid base with the set piece. Scrums and lineouts were dominated by the Topsham pack. There was feeling that the New Cross pack were being favoured by the referee who never awarded a turnonver in the scrums even though Top's forwards drove their opponents backwards every time causing their pack to disintegrate. 8 minutes into the half Graham searle crashed over for his second try of the day with Knowles adding the extras leveling the score. Alas it was not to be for Topsham as New Cross ran in three more tries before the whistle blew.

Man of the match was Will Nowell for putting in a stellar performance in the second row and giving the team a solid lineout platform in the lineout. Will has made an excellent transition to adult rugby and looks to be a regular feature in the 1st xv