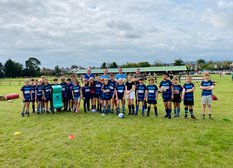 It was a good all round performance from the Topsham team on a cold day in Kingsbridge. Topsham started the first quarter well with a quick brace of tries from Frankie followed swiftly by another from Harlan. After the first quarter Kingsbridge sorted out their defensive lines and increased their intensity at the break down giving Topsham a much tougher task in the second quarter. The result was that Kingsbridge started to make an impact on the score board although they didn’t manage to wrestle control of the match from Topsham. Despite the unfortunate loss of the work horse that is Ed Ford due to injury, Topsham raised their game and the tries eventually came with a great try from George Smith who weaved through the defence to touch down over the line. A further try from Joseph RL set the tone for the rest of the match. Tully and Sam put in some hard yards in the centre of the pitch helping to sustain Topsham’s playing platform. Tully scored a lovely try stepping past several players to make the score and put himself in contention for man of the match. Isaac crafted some lovely side steps and Joe Fordham, William Rueben and Ed Hodges made their usual contribution with intelligent plays and good solid performances. If I’m honest I can’t remember all the try scorers so apologies if I’ve left you out.

There were two players of the match this week. As well as scoring a try, Freddie was a constant force to be reckoned with making some great tackles out wide keeping Kingsbridge pinned back in their half. He also attacked every breakdown with great gusto and a seemingly endless reserve of energy. Will BT was like a guided missile with his tackling taking down the opposition at virtually every strike. Thankfully though he left his piggy back technique back at Topsham this week.

There were a couple things that we might need to work on from the game. Topsham executed some really good rucking over the ball on several occasions but then lost possession for want of a scrum half. Kingsbridge were given too much time to counter ruck and were effective at doing so. If you find yourself at the back of a ruck and think you might be scrum half then you probably are! If Topsham could put together the passing game that they demonstrate so well in training they would also have got a hat full of additional tries, look up when you’re running and use that line of blue team mates running in support.

Great clean game played with respect. Well done to everyone including Paddy who did a great Job as referee.

Worthy of mention is Coco the dog who had a short cameo role but showed lightening pace and a deft side step whilst evading capture.
Thanks to Archie Oram Evenett for coming all that way to offer his support despite being injured. We hope you and Ed make a swift recover