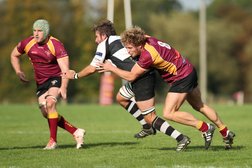 Threlfall clear to play this Saturday

After last weeks game and the receipt of 2 yellow cards and the subsequent Red card, Calum Threlfall was required to face the EMRU Disciplinary panel to find out what sanctions would be applied to the sending off.
Towcestrians supplied the panel with the incident on a video due to the decision of the committee to plead not guilty of the charge.
The committees view on the video was to show that before the tackle Mr Threlfall's arms open before the impact of the tackle and in our opinion was a legal challenge for the ball and Not a No Arm Tackle in the referees view.
After a short meeting with the disciplinary panel and a review of the video, the panels decision was to uphold the red card decision of the referee but the sanction of being sent off during the game was a sufficient.
This will allow Calum to be selected to play this weekend at Tunbridge Wells.
Share via
FacebookTwitter
https://www.pitchero.com/clubs
Recent news