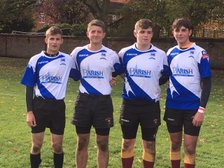 Tows lose out to the badgers

After a couple of weeks disruption and with some lads returning from injury it was good to get some more game time under our belts this week, and thanks to Bugbrooke for filling in as both of our planned opponents fell through.

Both sides had a few guys out this week with representative Rugby at the DPP level (more to follow on that) and holidays today.

Congratulations too to James Coleman who has now joined the squad and got some of his first game time today in the backline.

In terms of the game Badgers got the better of us again this week. While we had more than plenty of territory and possession we just couldn't be precise enough in using the ball when we had it and needed to work harder in defense.

Some key positives for us were continuing to have some good set piece ball and we stepped up our game well in the scrum today. We worked out the breakdown after a shaky start and after a few 'choice words' the forwards put in some more graft in the 2nd half which was needed. And we scored 3 well worked tries from Cassidy, George and Harvey.

The stuff we need to work on we will leave for Training on Wednesday :)

Sometimes you have just got to remind yourself its not all about the results, its about seeing the lads progress, and improve and helping to develop them into the senior players of the future. Well done lads for representing Tows so well today, some very proud coaches.