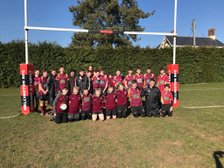 At a beautiful Rugby cub Tows played well this morning against some very determined and hard working opposition in a match that was played with excellent spirit from both teams and some real class from our hosts, their coaches and supporters.

With a few lads unavailable and also with Dan Lovell, Isaac Rappaport and Kody Johnson at the East Midlands squad trials today, it was a good opportunity to rotate the available squad for lots of game time.

Overall there were lots of positives from today. The whole team played very well with the forwards giving us some excellent go forward ball and the backs scoring some well taken individual and team based tries.

The match ended a little early due to the scoreline but real credit should be given to the opposition and their coaches who are definitely on the right track and have some really good lads there with lots of potential.

Onwards to next week, lets get to training lads so we can keep up with the hard work.

MOM: Alex Williams - Close fought one this week with some great performances. But Alex nabs it after some real hard work and high yardage with the ball and great defensive work without.