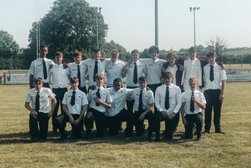 Today we were Away again - in the opposite direction ‘up’ the M1 to last week. This week we travelled to Syston RFC near Leicester to be greeted by a nice set-up, a great set of lads and a tough game of rugby.

We’ve been very dominant in most games and I think the lads would be first to admit there was starting to be a little complacency creeping in to our performances. Today that complacency was back and I believe it was one of our worst ‘team’ performances for some time. A win is a win, and we did win, but we made real hard work of it and the result did flatter us to be honest.

We started strong, which was good to see with a strong maul off a line-out inside their 22. Ricardo broke from the maul to secure our first try. Harvey was back this week after his knee injury and he kicked the conversion from wide out with a great kick. 0-7 to Tows.

Our second try came just a few minutes later - a great run from JJ and he was subject to a high-tackle; advantage was played and Ricardo managed to secure our second try. Harvey placed the kick perfectly and we were 0-14 up. At this point, Syston looked shell-shocked - we had started strong and decisive. But that all changed from the restart.

A big kick from their restart and Edward decided to let it go out. Should have been no issue, but it was still a line-out for us about 10 yards from our touch. An unnecessary line-out throw to fourth man, a weak lift, and possession was lost and they got a try! Literally minutes after our own score. A few lads started criticising each other and that was the start of our afternoon where we were chasing a game that we should have dominated. They missed the conversion; 5-14, but just minutes later they had another try from a series of unforced errors. Another missed conversion meant we were still 10-14 up but the momentum had shifted and Syston were well drilled and were looking to make the most of it.

We managed to get a line-out on their 10 yard line and quick hands mixed with strong lines gave JJ and great chance for a try. Their defence was strong, but JJ managed to commit their last man to a tackle just as he offloaded it to Lucas who put the ball down for a try on his first game in a Tows shirt. Well done Lucas. Harvey missed that wide kick unfortunately, but we were now 10-19 up as it stopped for half-time.

A strong team talk and we hoped a more focused team would come out for the second half.

Their kick for the start of the second half and the calamity continued! Pires dropping the ball, they were on our boys like a shot and they had another try! Thankfully another missed kick meant the score was 15-19 but had those kicks landed we would now be behind.

A penalty for Tows and quick hands out to Harvey - he did a cross field kick that was utterly perfect for Monk to catch and get to the try line. That was more like it, a great play and we were 15-24 up after the missed conversion. Yet again, we didn’t press the advantage and they secured another try from a weak Tows line out and the score was 20-24.

Then it was their turn to make some unforced errors - their line out went to ground after fumbling and we secured a Penalty about twenty yards out right in front of the posts. We decided to take the points available so Harvey kicked the pen and we were 20-27 points up. After the restart, we pressed them hard and after a ruck on their 22, Owen (who was playing #9 because Connor was sick) picked up the ball and ran a great line through a big space that they had left. A great run and Harvey also kicked the conversion. 20-34 to Tows. Surely now we had this game secure?

Bailey was feeling rough today and his decision making was way off - particularly for getting pinged multiple times for offsides at their line-outs. A penalty from one of these offsides and they were through again and secured yet another try. Missed tackles and poor decisions. This time, their lad kicked well and they were back in it again at 27-34.

Harvey kicked the ball straight out from the restart, everyone seemingly making errors today, so the ball was brought back to the centre for a Syston scrum. With one score in this, we really needed to pull it together. Luckily our defence proved strong and they forced Syston in to an error giving Harvey the ball. A great run up the wing and with one man to beat he sent a grubber past their full back - he made no attempt to hide his tackle on Harvey way after the ball was gone. Advantage played the boys chased the ball down before another high tackle gave us a penalty just 5 yards out. A quick take and Joe ran it home for the try. A great try from our prop, who also wasn’t having a great game. Harvey kicked the conversion and the ref blew for full time with the score 27-41 in our favour.

There were moments of great rugby today, but our ‘team’ play was poor. Too many individuals making decisions that left us exposed and ultimately having to work very hard to secure the win. Lots to work on during training this week - a win is a win though.