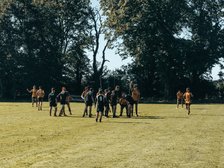 A tough home game that gave us plenty to work on.

We knew today would be a tough game. Market Harborough, at home should be a fixture that we still win, but with injuries and players not available we were left with sixteen players, of which two should have been rested. Market Harborough RFC are a great side with quality coaches and they are very well drilled. Turning up with a full compliment of players and finishers, this was going to be a real test for the Under 16's, who haven't lost a game since the County Cup Semi Finals against Ampthill in April 2019.

We worked the boys hard in the pre-match warm-up and they looked ready for this. However, we still struggled to start 'ready'... From the start the Market Harborough boys were quick to every breakdown and scrum. Well drilled and disciplined, we were 0-5 down within a few minutes. A well worked line-out and hard running backs. They missed the conversion though, in particularly blustery conditions.

From the restart, we were quick to the ball ourselves, earning a Penalty from the resulting ruck. Inside the 22, we decided to get some points on the board to help settle the nerves. Uncharacteristically, Harvey missed the kick. Harvey never misses, so this actually seemed to knock our confidence even more.

Just minutes later, we were 5 yards out and a brainfart moment led us to a poor call from a line out and try to set a maul with no contact. Silly, silly errors. Possession lost at a pivotal point and a chance to draw level.

We managed to keep the pressure up though and forced them to a knock-on just 5 yards from their touch line. The referee today was very focused on the scrums and I'm not sure a single scrum was allowed to run without some sort of intervention or caution. This was one of those scrums, that should have been a simple drive to the try-line but it ended up with our boys being pinged and overturning the scrum to be a Market Harborough ball. Second time we were in a simple scoring position only to come away with nothing.

This was a very evenly matched game, our Forwards I think had the edge and their Backs did. But they seemed unable to get the ball out of their half. Good pressure from our makeshift pack kept the pressure up. From one breakdown they managed to get the ball out to their Backs with really quality passing and quick hands - the overlap left Edward exposed and they were through for a simple try.

That was pretty much it from the first half. We were 0-12 down, but we weren't out of this by a long-shot.

We needed to score first in the second half, and we did manage some good pressure that forced errors from Market Harborough. But, after drawing our Forwards in, they got it out to their Backs again who ran in a very good try. Not what we needed! They missed the kick, but we were now 0-17 down. Not having our Head Coach there, plus missing players was starting to see our side creak.

If we were to get back in this we needed to score next, and that we did. Finally returning to basics with some hard running from the Forwards that resulted in Ricardo getting a try. The weather hadn't improved, but Harvey still managed to get the conversion. 7-17.

Joe had picked up an injury. He was really struggling with his side, bruising to his ribs or worse - as we tried to ascertain how bad he was, they skipped passed him where there was a massive hole in the line. Unable to get across to the tackle, they were through under our posts for a try and simple conversion. Joe had to come off, and just like that we were 7-24 down.

At this point, many teams would have rolled over. We aren't used to being behind, and whilst we weren't playing our best, many of the boys showed some real character to dig in and it wasn't long before we secured a turnover on their 10 yard line. They gave away a penalty and Ricardo took it quick running hard at them for a great team try in that phase of play. Harvey missed the conversion in the winds, but at 12-24 we might still get something from this.

Basic rugby from us, grinding them down. Some nice big hits from our Forwards to secure a Penalty a few yards out - Harvey kicked to the corner and a Tows line-out. This time, the right call from the line-out and the ensuing maul was too much for their pack. Bailey getting the ball to Josh for a simple dive at the line. Great, simple rugby, well executed. We were back in this - especially as Harvey got the kick in really strong winds. 19-24. One score in it with just five minutes to play.

A scum inside our half and they were guilty of an early push that wasn't picked up. Complaining Forwards, but the ball was out and despite a forward pass they got the ball out very, very quick. Really well drilled Backs that knew their place and the position of the man on their shoulder - our Backs unable to match their speed or intensity at this stage in the game. They secured a simple try at the corner that wasn't converted.

That was that, our first loss in 18 months and it hurts! Largely the game was played in great spirits and Market Harborough are a quality side. It was closer than the 19-29 score suggests, but we'd love the chance to play them again this season. Was a great test and I think we'd be better prepared next time - and hopefully have a full compliment of players!

Saints DPP.
Also want to take this opportunity to congratulate some of our boys that were picked for the Saints DPP after last weeks trials – Ricardo, JJ, Joe and Luca – Luca, we could've done with you there today! Well done lads.