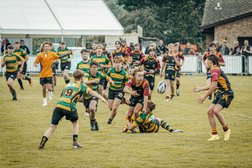 After one of our best-ever performances last week, we managed to make it difficult for ourselves again this week.

Being the start of school half-term for the private schools, we were missing a several of our players - including both number 10's. Edward Monk had to step up to that role and overall did well today considering he's never played there before. Excuses over with, we were at Home on the First Team pitch and should have secured this result long before we actually did.

From the kick-off we looked sharp and it wasn't long before we had a line-out on their 10m. Taking it in for a maul, our pack pushed them back until Taylor broke away and dived for the line to make it 5 - 0 to us. It was a tough first kick for Monk, and unfortunately he didn't quite make it.

From the restart, we relaxed and Bugbrooke dialled up their intensity - in an almost exact reversal of our try they did the same to us - line-out, maul, try. Thankfully they also mirrored our missed kick, so we were back level at 5 - 5. Their mauling all day was strong, and ours wasn't - not sure why, but we just weren't with it today. Several unforced errors from us and it wasn't long before they had a Penalty 25m out and in front of the posts. They decided to take the points and a decent Penalty kick put them in front 5 - 8.

For the next 15 minutes we continued our current form of making poor decisions inside their 5m line. At least two or even three tries slid away from unforced errors or players being too greedy with white-line-fever. Simple rugby needed, we managed to settle down not long before half time and we had a strong maul just 5m out - again. They made an infringement this time, so it was our Penalty. Joe took it quick and ran hard at their defensive line to take a well deserved try. Edward took a great kick too, so our lead was restored with us 12 - 8 up going in to half time.

Half time team talk was a chance to get our boys to consider how they were playing. Why complicate things? Keep it simple.

We extended our lead not long in to the second half with a Penalty inside their 22. Quick hands, drawing their tackles, gave Ricardo the chance to pick and go off a ruck and secure another Tows try. A tough kick for Monk, which he kicked well but it just fell short. 17 - 8 and now we started to open up some space.

Some great work from the forwards led Bugbrooke to make an error with a wayward offload - Deamer picked and ran... almost half the length of the pitch with two of their boys not making a tackle. Great run from Deamer for another Tows try. Monk did a great kick and that put us 24 - 8 up.

Bugbrooke RFC did keep at it though - in fact their mauls meant that they were always a threat inside our 22. After a few plays, one of these mauls resulted in their second try that was also converted. 24 - 15.

Two plays up, our boys knuckled down to push them back and gain a Penalty inside their 5m. Joe took it quick and forced his way over the line. Monk also kicked the conversion so we were 31 - 15 up. We had one more try in us before time was called - Flash ball was the call, JJ getting the ball when a gap opened up for him - and he doesn't waste those opportunities often! Quick legs and he ran through for the try which Monk kicked quickly. Game over, 38 - 15 to Tows.

Not a Classic game from us, but with many players out it was good to still secure a win.