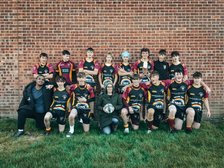 With several boys out this week and Peterborough RUFC having seven Saints DPP boys, we were expecting a proper challenge.

The Under 16's are used to travelling to find matches, this Season we've been as far South as Watford and as far North as Nuneaton; and today was no different with a long drive North East to Peterborough. An hour and 15 minutes to be precise, and we knew we would only have 16 players with no second row at all! Harvey confirmed last minute, having missed his flight home from Portugal yesterday, but luckily a later flight meant he did make it home (at 2am) albeit he'd only had a handful of hours sleep.

We played Peterborough two years ago, and although we won, we recall it being a tough fixture as they had some big lads and a good few Saints DPP players. True to recent form, we started slowly - our kick-off and they ran hard with their #8 and Forwards at our defensive line. Big, physical plays, several missed tackles and they pushed us back and back until they got the ball down for the first try of the game. A decent kick and they were 7 - 0 up. That isn't why we drove all this way to see our boys out-played in the physical side. Some strong words of encouragement from our Head Coach and they knew they had to get their heads in the game. Which they did.

To be honest, I think that may have been the one and only time that Peterborough found their way to our 22.

From the restart, our intent showed. Boys charging down the kick and their player fumbled and knocked it forward. Our scrum, which was dominant despite having our own Saints DPP prop, Joe, watching from touch. In fact, with Luca and Tommy also missing, the entire pack was rearranged with Bailey moving from Flanker to #8, Taylor and Ricardo moving forward to second row. From the scrum, Connor got the ball quickly out to the Backs and quick hands gave JJ an opportunity that he rarely misses - try to Tows. Harvey, still a little sleepy, uncharacteristically missed the kick. 7 - 5 to them, but we'd bounced back quick.

From the restart, they wanted to exert their pack's strength again and it took us a few minutes to get their measure. One decent tackle got their #8 down though, near our 22 and Bailey jackaled the ball for a turnover. Ball got out to Harvey who ran a hard line at their Backs, who eventually popped the ball out to Jacob on the wing who was run out to touch. Their line-out and some big tackles from JJ resulted in a penalty for us. Kicked to touch, it was our line-out just 10 meters out. A maul against their pack was always going to a challenge, but that was the call and it was the right play - driving them back sucked all of their Forwards in before quick hands got the ball to Harvey, JJ, then Owen who cut back inside for the try. Harvey kicked and we were 7 - 12 up.

The big Forwards were big but now starting to blow from the speed of the play. Another turnover on their 22 gave Monk the ball on the wing - a decent run and we had another try that Harvey kicked. 7 - 19 to Tows.

Their heads were starting to drop. From the restart, Buffalo caught the ball and ran at their defensive line. Quick hands from that ruck got the ball out to Harvey and then Lucas who ran half the length of the pitch to secure himself a try that Harvey also converted. 7 - 26.

We now had the measure of their Forwards and made sure it was the speed of the play that put their big lads on the back foot. One of their boys getting frustrated at a maul, did a nasty neck-roll on Bailey that gave us a Penalty on their 22. Taken quickly, hands to Harvey who audaciously did a double length pass over JJ that gave us an overlap - Monk passed to Lucas who got another try. 7 - 33.

Despite a lack of sleep, Harvey was enjoying himself today. And when he's on form, there's few that can live with him. From the restart, their number 10 kicked straight to Harvey - big mistake. After running back at them, he kicked it over the top and ran on to meet it himself for a fabulous try - that he also then converted. Brilliant skill that made the score 7 - 40.

Before long we had them pinned in their 22 again. They simply couldn't get out and the mounting pressure resulted in a dropped ball that Connor pounced upon and ran through for the try which Harvey kicked. 7 - 47.

At half time we knew it was possible to get 100 points. Despite starting strong, Peterborough now looked like they had had enough. Our boys knew we didn't want any showboating and we also didn't want any silly mistakes from thinking the game was won. Keep up the effort and make sure the score reflects the nature of our play.

From their Kick-off, Buffalo caught and ran at them. Tackled, great rucking from our boys and the ball was quickly out to JJ who ran it in for a nice try. We'd taken Harvey off now, so Edward was taking over kicking duties as he had last week. A nice kick from him and we were now 7 - 54 up.

From the restart we were back at them again, fast hands out to Jacob who ran well down the wing, cutting inside and offloading to Owen who ran it in for a simple try. Monkey kicked again, two from two and we were 7 - 61 up.

From the kick, Deamer caught and ran hard at their line, taking yet another high tackle from their #8 that resulted in our Penalty. In a near carbon copy of the last try, we got the ball quickly through hands to Jacob on the wing who ran it in for a try - was a good try as they tracked back and tackled him near the line but a great show of strength got him over the line. Being out wide, Monkey missed the conversion so the score was now 7 - 66.

Peterborough literally couldn't get out of their half now. Some really special rugby from our boys and they were really enjoying themselves - a Penalty on their 22; head Coach screaming for a Flash call which the boys duly did - JJ running hard at them and committing some big tackles before offloading to Ricardo who cut back inside for a try. Harvey kicked it. 7 - 73 to Tows.

Unfortunately, with around 20 minutes still on the clock, their Head Coach called the game and that was that. A truly dominant performance that hopefully puts us in a decent place for a tough game against ON's next weekend. Well done boys. Thanks to Rebecca for stepping up and being our First Aid support.

All boys training tomorrow please as we have the Coventry Head Coach taking the session.