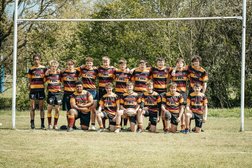 Good game of Rugby today against an improving Long Buckby/Casuals side.

Tows had much the better of the first and last 20 minutes of the game, but went to sleep a bit in the middle 20 with a couple of defensive lapses allowing LB/Casuals to close the score.

Some well taken tries from the lads, and a few tactical tweaks and rotations were made through the game.

Most pleasing try of the day (for me and his brother anyway) was Sammy (Mini Nando) Anderson taking the ball at outside centre and crashing over with pace from 15 yards out to secure the win.

Not bad for a front row.