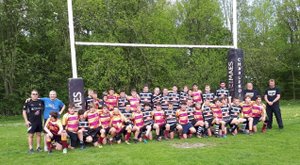 In a classic grass roots Rugby club in Charleroire, Belgium the lads had a great early afternoons Rugby with some fabulous hospitality from the hosts.

Following a very tough match yesterday and some ‘light’ social activities from the previous evening the lads were a bit jaded and lethargic in the warm up.

During the main game we played really well and won the match 10-5. Two great tries from Dan and Macca.

Being a little strict to the rules it should have been 15-0 to us as a great burst through from Ike was judged to be knocked on as he touched down (didn’t look it) and the try from our opponents had a unanimous ruling (from the experienced referees on the sideline at least) that it was clearly knocked on.

Regardless, our lads were the better side, defending well and looking dangerous with the ball. More so impressive as we had a couple of lads who couldn’t play after knocks from the following days battle.

We agreed to mix things up a little bit and played a fun Backs as Forwards and Forwards as Backs game in the latter stages so the lads could have a little giggle.

Red Star rugby were very hospitable hosts, some lovely awards post match and a little sing off contest (which the lads clearly won) with a classic rendition of Mighty Towcester (led by the song master that is mini Nando).

Great tour and a brilliant experience for the boys.

Post match notice of the “Tour Highlight”
* The sudanese National strapped to the bottom of our bus getting caught trying to get through customs at Dunkirk!!!!! I ? you not !!!!

* Tour Captain of the Tour - Neil, outstanding job but the singing in tune needs some work!

* Tour Organisers of the Tour - Mandy and Sally Hersaut, top marks all round xx

* Driver of the Tour - Tony, The driver! #lovethegloves

* Hitchhiker of the Tour - Thanks mate, very helpful in missing the 6pm ferry, you total and utter absolute ....