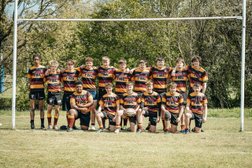 Well, we didn’t think it would be 14 months before we could play rugby after that home game against Bromsgrove in March 2020, but today we were back.

Today it was over an hours' drive to Ashby RFC, to play a team that hasn’t lost for quite some time. Today, they did. Nine converted tries with four coming from the Forwards and five from the Backs.

It was the first game for Hooker, Josh Doyle, who joined Towcestrians at the end of last Season from Buckingham RFC - despite training during this time, it was the first time pulling on the Tows shirt and playing in anger - and he had a good game. Only 16 boys turning up, we had just one sub to rotate whilst Ashby had six. The continued fitness and effort put in during the sessions we were allowed to play put us in good stead as all boys got to the end and actually finished looking the fitter despite Ashby playing all their subs and rotating.

The Official Referee called all players and coaches together to go over the rules, and he seemed less confident about them than us! No mauls, no scrums and uncontested line-outs - but other than that, let’s play. As it turned out, he wasn’t keen on our Forwards jackaling the ball and did not give us the breaks we deserved in that area.

Each half was split in to two with a deserved water break for the boys. At the whistle, the Tows boys made sure to get some big hits in and Ashby didn’t look keen on that physicality - two first quarter tries to Tows, scored by JJ Hunt and Ricardo. Harvey kicking both conversions, with one going over despite the kick being from touch. 0 - 14, advantage Tows.

The second quarter was much of the same - quick hands and good cover from the pack, often working in pods. Joe, Buffalo, Luca and Josh all landing some big hits. JJ broke through for another try which Harvey converted; and then Harvey intercepted in our half and ran through the gap to get our fourth try which he duly converted. 0 - 28. One of the best team moves of that quarter provided me with our fifth try - some great play from our pack to turnover the ball then quick hands and side stepping from JJ before being tackled and offloading to Harvey. A strong run from him before he was tackled but he just managed to get the pass off to me in time so I could run it home for the try. Yet again, Harvey converting the kick.

0 - 35 at half time, their team were given the riot act. And that worked for them, a momentary lapse in our concentration and they were through our lines and getting one back which they also converted. 7 - 35. Game on. I think this quarter was where we looked our most tired and despite JJ getting another try, they also got another one back with an interception that gave their winger time to get the try. 14 - 42. They had the chance here to get back in the game, but the boys dug in and really found another gear. After the water break, Ashby had nothing left, their players simply didn’t want the ball - quick hands from one attack with great support from the Forwards gave Ricardo his second try of the game, his first game starting as Number 8 for us. 14 - 49 after another conversion by Harvey.

Our eighth try came from Taylor, his first game as Flanker after being #8 last Season, but he did well today in the new role. Great physicality from him, handing off their pack and running through to put us 14 - 54 up and then Harvey also kicked the conversion. 14 - 56.

Another breakdown in the Ashby attack gave JJ the ball and nobody was going to catch him - they didn’t even try. 14 - 63 after the conversion. Four tries for JJ, well played. They knew they’d been in a game today, and the Tows boys did well considering the last fifteen months. Well done lads.

It wasn’t perfect, but we can work on that! Starting tomorrow night with training.

Man of the Match has to go to Harvey Poole. Nine conversions, one try but needs to keep an eye on his discipline!

It was great to be back. Another game next Sunday. Let’s go!