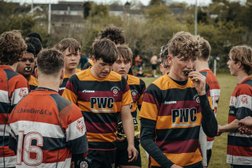 Today we were away at Oundle RFC. They turned up with only 14 players, so we had to drop one too to make it even.

The wind was swirling and we opted to face the wind first. Straight out of the blocks we hit them hard and made sure they knew they were going to be in a match. Ricardo picking up where he left off last week, pushing through and grabbing us a nice early try. Harvey didn’t miss a conversion last week, but this week he has some serious winds and his first kick was wide and straight in to the wind. He caught it sweetly, but the wind just pushed it wide. 0 - 5.

Their reputation for being a bit tasty was deserved and we got sucked in after our try. A little too confident and their No.9 was making himself a right nuisance - doing his job well. They pushed us back and quick hands got it out to their wing and we were level. As much our lapse in concentration as anything, but fortunately they missed the kick too so it stayed 5 - 5.

Our turn to get back in to this, and some physical running from the Forwards punched through their pack and we set JJ off - did they have anyone quick enough to catch him? No they didn’t. He was gone and we were back ahead. 5 - 10. Harvey had the measure of the wind now and kicked sweetly to put us 5 - 12 up.

A good battle then, they were trying to get in to our heads and disrupt our play. It worked to a certain extent, and another strong drive from the Forwards got us close - Ricard running a hard line and getting within a yard of touch. A nice offload to Tommy and he managed to get us over the line - a try that Harvey also converted. 5 - 19 to Tows.

It’s at this point we should have put the game to bed, but we didn’t. A few unforced errors and they got through for a try, which they also converted easily. Half time it looked closer than it should have - 12 - 19.

We expected a firm talk at half time and Julians words certainly resonated. How were they still in it?

A strong ruck from us, myself and Josh turning them over. Quick hands from there put the ball with Harvey and he was gone - their alleged best player who is in Saints DPP trying to catch him. He didn’t. 12 - 31 and then Harvey converted his own try to make it 12 - 33.

At this point, some strong but fair tackles left Oundle looking like they’d had enough. Two of their boys said they had had enough - with no subs, we had to drop down to 12 players too. No matter, they’d lost their fight now. True enough we were through again with JJ pacing through their team and taking a nice try that Harvey converted. 12 - 40 to Tows.

Just before the kick-off the Ref said they’d ‘lost’ another player - they wanted to play 11 v 11. What a waste of time. Julian had also had enough and called-it - no point in playing a glorified Sevens game. The game was stopped a good 10 - 12 mins early. Ricardo wanted his hat-trick! We were good to get at least another two tries, but we’ll take the win.

Well done boys. Another decent performance with work needed on our line-outs.

Man of the Match could have gone to a few players. Joe and Taylor had good games, JJ and Harvey also having some great runs and strength in the Backs. But this week, he kept his discipline and let his rugby shine, well played Ricardo - Man of the Match this week.