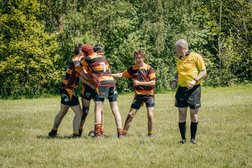 With just 15 players, it was always going to be a tough game - but the Under 15's signed off a strange year with their performance of the Season.

Our final fixture of the Under 15 Season was against an unknown Coalville RFC side that have rarely been beaten. With some boys off because of the Half-Term break, we were struggling to even make a full team. Big thanks to Luca (and Family) for postponing their vacation so he could still play for his team – but even with Luca we only had 15 boys. No subs on the warmest day of the year - no problem!

They were training before we arrived, looking well drilled, with a few big lads. This was going to be a decent test for the lads final fixture.

Having started slowly in last three fixtures, we knew that was an area for improvement. Today, we were quick out of the blocks, lots of pressure straight from the kick. They kept passing backwards and before long we were able to get a turnover and go for the try. The Forwards got it to just a few meters out, Bailey presenting in the ruck where Connor picked and went - a great read of the game that gave us our first try.

We were playing on a pitch that the Coalville groundsmen were ready to pack up for the Summer! The posts were partially taken down so it was a tough day for Harvey who always kicks so well - with barely any posts he had little to aim at and his first conversion attempt slipped wide. 0-5 to Tows.

It looked as though the boys were really aware of their tardy performance in the first 15 minutes of the other games when a strong run from our #8, Ricardo, broke through their pack for a strong run to the try line. Harvey didn't miss a second time and Tows were up 0-12.

Then we relaxed. Lulled in to a false sense of security, some individual errors led to their Backs breaking through and securing their own try which they didn't convert. Game on. 5-12 to Tows.

The next try was for Tows, another show of strength from the Forwards and Taylor was through. Harvey getting the kick, we were 5-19 ahead.

Yet again we seemed to go to sleep from the kick off - something we will work on, but they got through again for a try between our posts that gave an easy conversion. 12-19. If we were going to keep giving them opportunities, this could be a long day!

With a mid-half water break the boys came in to hear what they already know - keep your focus, stop making silly errors and put the game to bed. The 15 boys that came back out were the team we know they can be. It was, without doubt, the best performance of this short Season with Towcestrians totally dominating in every area. Basically, Coalville did not get another point for the rest of the game. They played well, very well at times, but our boys made great try saving tackles and huge hits in the middle of the park when needed. Some great jackaling and turnovers, with plenty of great runs.

Until now, you haven't read JJ's name - which isn't like him to not be on the score sheet. We know it has been a tough week with various pressures on our age group, but after an amazing run from Taylor, where he was hit VERY high, JJ got the ball from an advantage played and he was through. Try and conversion. 12 - 26.

The next score came from a great play we've practiced time and time again - and the man to ground the ball was Hooker, Josh. Unfortunately, Harv didn't get the kick but we were now 12 - 31 up.

Conner had a great game today, he really stepped up and that showed when you look at the score sheet – he got the next try, his second of the game. Just what we'd asked him to do, well played Connor. Harv got the kick and we were now 12 - 38 up.

The next two tries came from Ricardo - they couldn't deal with his strong runs and he deserved his try hat-trick today! Well played Ricard, you called it before the game too. You could have been man-of-the-match, along with Connor but that honour goes to Jacob. He read the game well and was always looking like a threat - as you can see with one of the high tackles in the pictures (though we were guilty of a few of those too! Owen! And a few others that didn't get caught on camera!).

Harvey's kicking game was on point today and another kick out to the wing was picked up by Rueben who managed an offload to Pickles who got the try. Great team play. The next three tries all came from the Backs, with JJ, Jacob and Harvey all scoring the final tries.