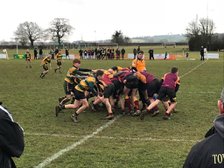 Tows Under 14 Win against Bugbrooke

Bugbrooke were strong and set the pace early in the first. A late first half try from Archie Short and converted by Harrison West made the halftime score 12-7 to Bugbrooke. The second half got underway and another early try and conversion from Bugbrooke extend their lead to 19-7. Midway through the second half Tows hot back with Try's from Thomas Jameson and Charlie Bodkin both converted by Isaac Smith put Tows back into the game and leading for the first time in the match 19-21. With just 2 mins to go Bugbrooke score but missed the conversion putting them back into the lead 24-19. Tows continued to press and a last play Try from Alfie Cawthorne gave Tows the win for the mighty Under 14's..

This was Bugbrooke's first loss at home this season. What a game of rugby, not pretty stuff and not our best performance... #COYT #TowsRFC #TowsU14's

Player of the Day Alfie Cawthorne.