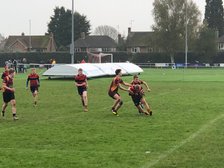 What an excellent display of Rugby from both teams.

A late first half try from Jack Brydon saw us draw level (5-5) with ON's at halftime.

The second half was a different story. Tows were caught napping early on in the second half with two quick Try's from ON's, both conversions were missed (ON's 15-5 Tows). Thankfully this woke the boys up and they managed to get themselves back into the game three minutes later with Try's from Tom Fell and Thomas Jameson, both converted by Tom Fell (ON's 15-19 Tows). Later in the second half ON's concede a penalty with was successfully kicked by Tom Fell extending Tows lead to by seven points over ON's. ON's respond well and score but miss the conversion (ON's 20-22). Late in the second half ON's score again and this time they successfully convert the Try and take the lead (ON's 27-22). It's a tense finish as the game enters the last play, Tows have control of the ball passing it at speed down the line to James Hodgkins who scores for Tows levelling the match 27-27 each, Tom Fell's conversion was narrowly missed.

Player of the Day: Alex Pluck