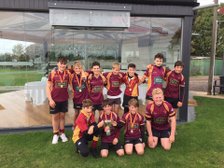 Tows U13 runners up at Peterborough tournament

With the U13 squad split this week between a fixture with Bletchley and the Peterborough tournament to ensure plenty of rugby for all squad members, it was fantastic that both squads did so well.

The final was straight after the semi against a strong Ampthill side that had had a nice rest. Tows stuck to the task but were not able to defend against some strong individual running and with a much smaller squad on the day had some very tired lads. The Tows U13 showed great teamwork and support throughout the tournament scoring against strong defences and in the words of coach Adam Holton "there were some sexy backs moves".
Runners up medals and trophy in hand it's a good start to the season.