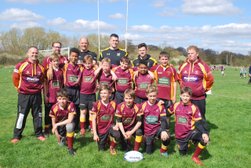 This meant that Towcestrians had Won

With many clubs coming to fine me and the other coaches to say how good the team was and 3 Wasps players saying they have never seen an u11 side play like that before, was a credit to the players.

Massive well done to you all.