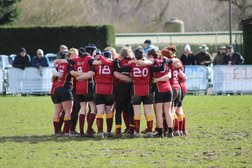 A rather muddy, wet and windy Sunday, was a tester for the resilience of the starting 15 for Towcester Roses on their second outing as team, the first time at home! With a large crowd gathered in support for the ladies on a game day making history, it was a proud moment for players wearing the Rose and families looking on.

For 60 minutes the score remaining at 0-0, showed how strong the Tows' defence was. Fighting back an ONs team who have been formed for a while and have a number of County players. Tackles were strong and effective, including clearing out rucks and fighting for lose balls, slipping and sliding all over the pitch on mostly mud! Some big tackles from both backs and forwards resulted in a lot of lost balls, Tows winning possession, but not being able to create enough depth to break through to score. The same being said for ONs, the defensive line of Towcester, at times staggered,and not straight, still held them back from breaking free to score.

A long lose ball, over the try line and downward pressure being applied, but questioned if the ball went dead, meant Tows were disallowed a try at the end of the first half. Heads still high and Tows proud to be level at half time. Fresh legs were only ready to be brought on upon exiting the changing room.

With the conditions very heavy and legs becoming tired, ONs broke through just after 60 minutes to score a wide try. Tows regrouped and kept their defensive line strong. But with tired legs and ONs bringing on a number of experienced players, Tows began to notice the pressure and two further tries were scored under the post.

Not once did heads dip. Tows had over 100 supporters there to cheer them on, so they fought well right to the end. 19-0 reflected the very last 10 minutes, but could have easily been a 0-0 game at full time.