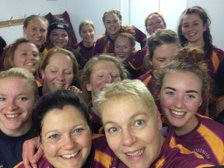 Win away from home!

Towcester Roses travelled to Royston, a team they’d played once before in a friendly, knowing they had a good win before but this time facing the opposition who are top of the table.

Tows took control from the beginning, carrying and passing well, the first try coming from newbie Chloe Yates who took a great ball from Amy Lovell out wide, allowing her to leap for the try line for her first ever 5 points! Kelly Harry kicking great, converting for a well deserved 7 point lead.

Another kick off for Royston, found Gemma Smith, taking ball in hand and carrying hard, she dodged all 15 players to run the length of the pitch to put us under the posts with another try!

Scrums galore in the first half allowed the strong Tows pack to take charge, great strength from Grace Tillen, Vicky Kilmister and Emma Russell. They were gaining metres and allowing pick and goes from number 8 Rosie Haigh to find the backs, charging on with Jen Lloyd going over the line with a fantastic burst of speed up the wing to go over for Tows again for their 3rd try!

Royston fought hard, rucking well and being aggressive at stealing the ball, meant Tows had to counter ruck and keep ball in hand. Kelly Harry dictated the play at fly half, feeding the ball to the forwards, Rebekah Nolan carrying hard and finding great lines, made ground for Towcester. The same as the second rows, Fay Tennant, Steph Eaton & Louise James who ran hard lines and made gains.

Kelly also carried well off of the scrum and line-outs, seeing breaks in their back line, Kelly went on to score also. Converting her try well, with some impressive kicks on the angles.

Royston made a break using their strong forward pack, keeping Tows on their toes at their try line, strong tackling from Siobhan Taylor kept them back, but with their strong front rows carrying they broke the Tows’ defensive line, scoring for 5 points.

Towcester upped their game and made some changes in the front and backs. Dev Wesson on the wing, made some booming tackles against their strong winger, keeping her at bay and stopping them from gaining metres. Lynsey Reeve on the other wing, doing the same, closing the defensive line with quick line speed forcing them to find offloads.

Tows went on to score tries in the wide channel, this time two impressive runs from full back Sam Phillips, going over twice for Tows. Quick ball from scrum half Josie Murray forced the play to never slow down, tiring the Royston team, this being shown as holes started to appear.

Rosie Haigh, strong as ever in the forward pack, marched over the line and scored again for Towcester.

Shelley Davy returned from injury today, as well as Emma Sale, nice to see them back in the team, coming on as ‘finishers’ in the eyes of Eddie or Ronnie we should say!

Line-outs worked well for Towcester, just like their scrums and the possession was all Tows’ way. Totalling up ten tries, Towcester went on to win 64-5 with ten tries scored and 7 conversions kicked.

Clear player of the matches went to Forward Vickie Kilmister and Back Josie Murray! But all round great performance from a strong team!