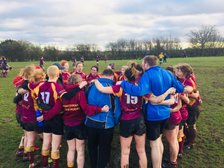 Towcester Roses stormed to victory again in a thrilling match against a forever improving St Neots. The Roses hosted their opposition down at Men’s Own who kindly lent their facilities.

The ladies knew that the traveling side would bring their A-game after Towcester travelled to them earlier in the season winning rather convincingly.

The game started with Towcester bossing it from the kick off. Within minutes Rosie Haigh went over the line, Kelly Harry kicking to get the lead 7-0. The team were spurred on by a fantastic home crowd.

Captain, Kelly Harry had a fantastic game, controlling it at fly half, with help from quick ball off of scrum half Josie Murray, assisted by concise rucking by Tows keeping the ball safe.
Kelly went on to score three tries in a row! Her quick feet and ability to evade her defence, adding 19 points to the scoreboard! Towcestrians leading 26-0 at half time!

The second half saw Milly Lee and Sarah Davey have their debut for Tows! Sarah (Rambo!) stamping her mark for her shirt by scoring a great try breaking through the St Neots defence.

Shelley Davey played her socks off, making breaks and being super aggressive in attack, leading to her getting a deserved forward of the match. She was assisted well in the front row with Vickie Kilmister and Grace Tillen, all three fierce in the scrum and throughout the whole game. It was great to see Louise James, Fay Tennent and Siobhan Taylor back in the pack. Also Chloe Yates swapping her high number to a small number, flanking for her first game gave the forwards a new element of attack.

St Neots kicked in attack, which pressured the backs for Towcester. But keeping her cool and catching the kicks and finding great lines in attack, full back Sam Phillips carried hard and made back metres for the Tows. Sam went on to win back of the match. Well deserved, with her fierceness in defence and quick thinking in attack.

Rosie Haigh went on the score another try for Towcester. Playing , as per usual, out of her skin.

Gemma Smith popping into 12 from outside centre went on to score the final try using her sheer strength and determination.

Such a fantastic game from the ladies. 110% effort given. The final score 43-0 to Towcester.